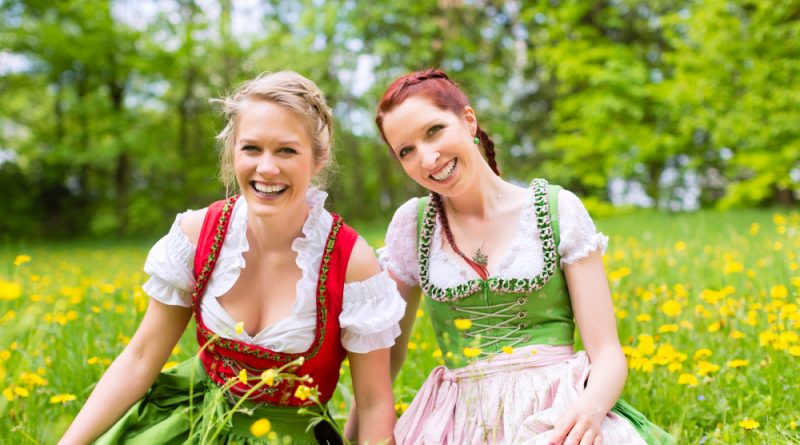 It’s that time of the year when all across the country, pop-up beer tents announce Oktoberfest. Or would have, was it not for COVID 19. Fingers crossed for next year. And no Oktoberfest would be complete without men and women showing up in Dirndl or Lederhosen.  Cause that’s what Germans wear, right? Well … kind of.

Dirndl and Lederhosen actually used to be the work clothes of farmers and workers and, really rather plain. It wasn’t until the 20th century that Lederhosen really became the go-to outerwear for beer gardens and Dirndl became more mainstream. (Although wearing Lederhosen and Dirndl to Oktoberfest actually didn’t happen until the ’90s.) Either way, in essence, a Dirndl is neither a costume, nor the official national dress of Germany. It does, however, have its tradition.

Overall, the Dirndl as a fashion trend has had its ups and downs ever since the late 1800s. That’s when city women decided they needed some fun dresses for their summer vacation. They had their tailors copy the style of the country women, adding patterns and embellishments. Today’s fashion Dirndl was born.

Since then, there’ve been phases when Dirndl (and Lederhosen) went from being embarrassing to the younger generations to being the hip thing to wear in clubs – and eventually at Oktoberfest.  Ironically, every year there’s much debate as to whether Dirndl and Lederhosen should be part of Oktoberfest.  Purists dismiss it as ‘Wiesn Halloween’ (Wiesn being the nickname for the Munich Oktoberfest). At the forefront of those opponents are many of those who put emphasis on the differentiation between Dirndl and Tracht.

The word Tracht is derived from the old German dialect word ‘draht’ or ‘dracht’, which translates to “that, which is being worn” or “the way it is worn”. (Incidentally, Dirndl is German dialect for “girl”.)

And Tracht, depending on the wearer, includes specific headdress, jewelry, insignias, shoes, and other accessories. They’re also subject to rules about how they are worn, and when. But most of the time, Tracht consists of a dress in solid color, and add-ons that create a unified look. Lederhosen often are replaced with similar looking pants, but made of cloth.

Tracht used to clearly signify which region or even village a person came from. It denoted their social standing, what work they did, and current status of wealth.  It could even indicate the wearer’s marital status, their religion, or if they were in mourning.

These kinds of truly traditional clothes are mostly worn by members of Trachten Clubs. Those are the men and women you see performing German folk dances, and to whom traditions are extremely important. These dresses often are far more expensive than the average fashion Dirndl which, even today, still serves as everyday wear for many women in the country. (The days when city women would leave the house in a Dirndl are long gone.)

In essence: a woman who wears Tracht on special occasions will likely have a Dirndl for everyday wear. But the majority of women who wear Dirndl, unless they’re part of a Trachten club, don’t ever wear a Tracht. On their own, Dirndl really are just the more fashion-oriented version of what women used to wear for work in the country: a dress, a blouse, and an apron.

So there are basically two types of traditional German dress: The Tracht, and the fashion Dirndl.  Which kind of makes the use of the term ‘Traditional Costume’ a bit of an oxymoron: The Tracht is traditional. The Dirndl, although it has its tradition, is, for the most part, a type of dress. The only time either could be called a costume is when someone with no German connection wears it for Oktoberfest or Halloween.

Of course, you can get an approximation of a Dirndl on Amazon, or party supply stores. For the most part, these are sold as “perfect costumes for Oktoberfest or Halloween”. And that’s what they are – costumes. Most often polyester, and manufactured in Pakistan, Bangladesh or China. (For a more in-depth explanation about the difference between an Amazon Dirndl and the real thing ordered from a reputable importer, check out Bobbie Floerchinger’s article Why Not Just Buy a Dirndl from Amazon, published on MyDirndl.com )

If you want something closer to a real German Dirndl that won’t fall apart after 3 washes, you have the choice among a number of online businesses, such as the aforementioned My Dirndl. Most of these dresses have been designed and produced in Germany, following German trends and styles from various regions.  Sure, these generally cost more than what you pay on Amazon, where you can buy a dress for $50.

However, even on Amazon, a lot of Dirndl are offered at about $100, and still are mostly polyester. If you’re already looking at that price range, you might as well add another $50 – $100 for something that’ll last longer and supports a fellow European business owner who doesn’t just throw together some colorful fabric to create a quick moneymaking party dress.

And if you really want to be traditional, you’d be wearing your Dirndl on more occasion than just Oktoberfest. Particularly older German women still wear Dirndl at work or whenever they go out – even in the U.S.

If you want to go all out, and money is not an issue, you can go for a designer Dirndl. Those are still based on the traditional dress, but set apart in both design and pricing. More often than not, they’re so different from the basic work dress that they’re less likely to be worn at Oktoberfest, and more likely as party dresses.

There’s actually a bit of a blur in the pricing between a traditional dirndl and a designer piece.  A traditional quality dress will run between $200 – $300. This range generally covers the dress, the blouse and the apron.  Designer Dirndl, as sold by RareDirndl.com, start at about the range where the traditional Dirndl prices peak.

So if you want to get yourself a Dirndl, consider whether you want a cheap costume, a traditional dress, or something unique to wear at the next party. If either of the latter, steer clear of Amazon and get one.

For a listing of other U.S. based companies selling traditional Dirndl, visit our directory.