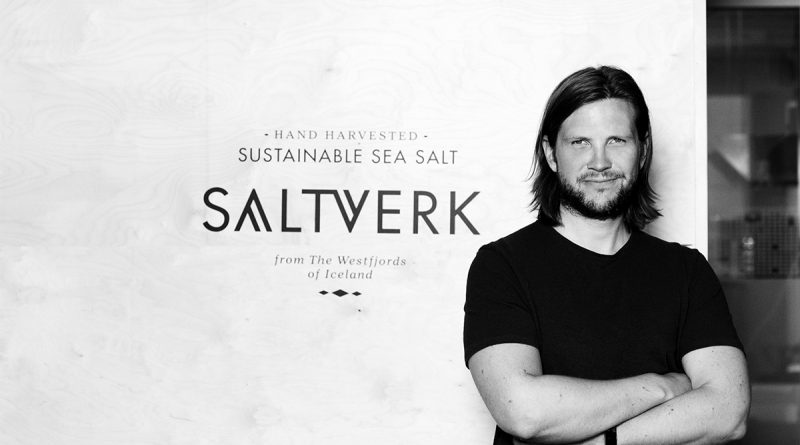 In the 17th century, when Iceland was still part of the kingdom of Denmark, the Danish king established a salt production facility in Reykjanes, Iceland.  Asides from being close to the sea, Reykjanes, (which literally means Smoky Peninnsula, due to its high geothermal activity), had the geysers needed for geothermal production of salt, an extremely expensive commodity in those days. But by 1792, the Danish kingdom was nearly bankrupt and could no longer afford the upkeep of the salt production facilities. Not to let a good thing go to waste, the Icelandic people continued to use the facilities through the end of the 19th century, but eventually, the business and it’s entirely natural process of salt production, were abandoned.

How It All Started

Bring in Bjorn Steinar Jonsson, founder and owner of Saltverk.  Jonsson had studied engineering in Denmark and for a while, worked at IBM.  Eventually, though, he was more and more drawn to the idea of a job where he’d “be responsible for something and actually see, from beginning to end, a product that he was making,” says Gisli Grimsson, salt maker at Saltverk since 2016.

In 2011, Jonsson and two friends, all self-declared foodies, wondered why nobody in Iceland produced sea salt. After some research, they came across the history of the salt production facilities in Reykjanes – likely the loneliest corner of Iceland, an hour and a half away from the nearest town. As luck would have it, a few abandoned buildings and a tank, for a brief time used by a fish farm, still stood on the site. These buildings were a perfect starting ground for the trio, and they founded Saltverk.

Saltverk harvests sea salt using the old Danish method of boiling down fjord water into a concentrated brine until salt crystals form at the top. The heat for the process is the geothermal heat from the geysers, making Saltverk’s products the only salts produced with a zero carbon footprint.

Running a business in a remote peninsula of Iceland is no simple task. Grimsson says they often joke about one day writing The Book of Salt Makers, with the title Problems and How to Solve Them.

From the start, Saltverk was able to sell all the salt they produced. “A luxurious problem”, as Grimsson describes it, which has given Saltverk the opportunity to consistently grow their business by investing their profits back into increasing of production.

But each winter, the harsh weather conditions in Iceland damage the buildings, tanks and pipes. That was also the case in 2019, when the worst winter Iceland had seen in decades caused considerable damage to Saltverk’s buildings. A storm tore the roof off one of their buildings, and an ongoing change of temperatures, caused by frequent power outages, created major cracks in their water tank.  The team went about renovating the structures during the spring of 2020 and finished repairs just in time for COVID to put a stop to so many businesses around the globe. But as Grimsson puts it: Nothing is so bad that you can’t find any good in it.

As COVID reduced the numbers of restaurant orders, so had the repair time reduced the amount of production output.  Saltverk’s biggest market at that time, tourism, also dried up, while at the same time online sales went up significantly.  Grimsson thinks that this may have been due to the fact that people who had previously traveled to Iceland becoming repeat customers. But he also allows for the possibility that in these trying times, people who can’t travel may just like to buy things from abroad, giving them some sense of travel without ever leaving their home.

Grimsson also believes that the company’s sustainable production methods contribute to Saltverk’s salt becoming more and more popular in the U.S. Another selling point is of course the fact that it is a high-quality, hand-made product, as consumers have become increasingly more selective about the quality of ingredients they consume.

Where To Buy Saltverk Sea Salt

You can order Icelandic from Saltverk directly.  Even though the company has no office presence in the U.S., they have a warehouse in Portland. All orders placed via the Saltverk site are fulfilled from there.  This makes for very affordable shipping cost, and no waiting for a package to come from overseas.  You can also order on Amazon.  Because Saltverk sells directly from their Amazon account, the price of their product on Amazon is the same as if ordered from their website.

Saltverk claims to be the only company worldwide to produce their salt entirely with geothermal energy. While there is another Icelandic salt company, Nordur & Co, producing geothermal salt in Iceland, they have no U.S. distribution as of yet and their production process is not clearly explained on their site. .

There are some third-party sellers that sell Saltverk product, but they are of course more expensive.  On the Saltverk website and Amazon, the 3.2 ounce jar of their regular sea salt costs $10.99.  Flavored salts cost $12.99 on both sales platforms.  And for the holiday season, Saltverk’s gift boxes including four different types of salt are going to be a great present for any foodie in your circle of friends!