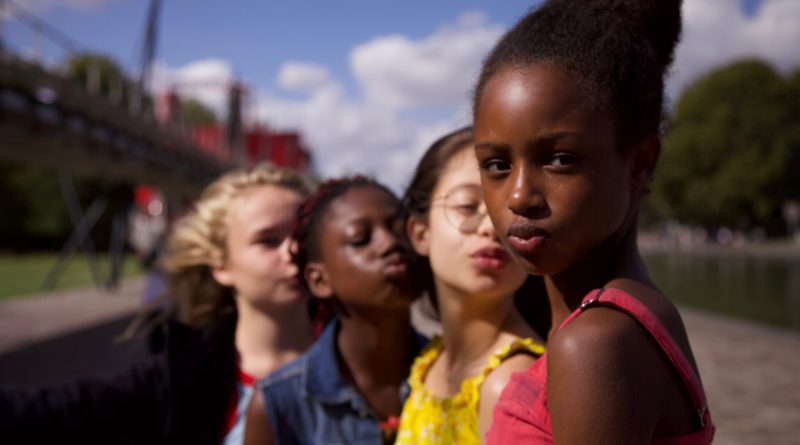 A coming-of-age film would be pretty tame – one would think. Of course, most classic tales of transitioning to adulthood focus on males. Cuties features a female straddling the line between girlhood and womanhood. That is an entirely different beast. Yes. Female development is complicated, and on many levels. This French-made film captures that complexity.

Amy is an eleven-year-old Senegalese Muslim girl (played by Fathis Youssouf Abdillahi), living in France.  She attends school and religious ceremonies as well as helping out in the house and with her younger siblings. And, she observes. She takes in and processes the world around her.

Things just don’t add up for Amy. She is schooled on the importance of being modest to avoid hell, while the males in her world seem to have no restrictions. Her father is taking on a second wife, and Amy’s mother Mariam (the first wife) must prepare a bedroom to welcome the new woman. Even the females in other cultural groups seem to enjoy freedoms that Amy will be denied. She watches her peers dress in belly shirts and observes them dancing.

And then, Amy swipes a cell phone and sees a bigger world that she actually CAN imagine. A world where being sexy and provocative gets likes – the attention Amy doesn’t get in real life.

Angry about her own reality and intrigued by alternatives, Amy teaches herself how to dance and joins a local street dancing group. It’s actually just a group of friends who decide to enter a dancing competition. Timid, initially, Amy quickly crosses the line from experimentation and “fitting in” to provocative movements that belie and betray her background and age, but do capture the difficult years when females become women.

The Uproar About That Sexy Twerking

When pre-teens (even in film) begin looking and acting sexual, conservatives come out swinging. Since Netflix opted to highlight the more risqué scenes in the film, it seems the criticism is aimed more at a few seconds of rebellion rather than the spirit of the full piece. One has to wonder if any of the #cancelnetflix posters bothered to sit down and watch the film.

In all fairness, there are scenes that one would not want to air for children; however, the film is much deeper than teenagers dirty-dancing. The lines of the story are interesting, compelling, and there’s a lot of truth to be found if one is looking, and open, and especially if one happens to be female.

Coming of age is difficult in any era, but the challenges are particularly robust in an era when the world seems to be upside down and templates are in short supply.

Cuties (original title: Mignonnes), is the directorial debut of French-Senegalese Maimouna Doucoure. The film opened in France in August 2020 with very little controversy. In the U.S., parents, politicians and conspiracy theorists are outraged. So watch it while you can, just in case it does get removed from the Netflix lineup.

For more information about the backlash, read this article on CTV News.

Check out the official Netflix trailer below.

For more Movie recommendations, check out our Movies category page.