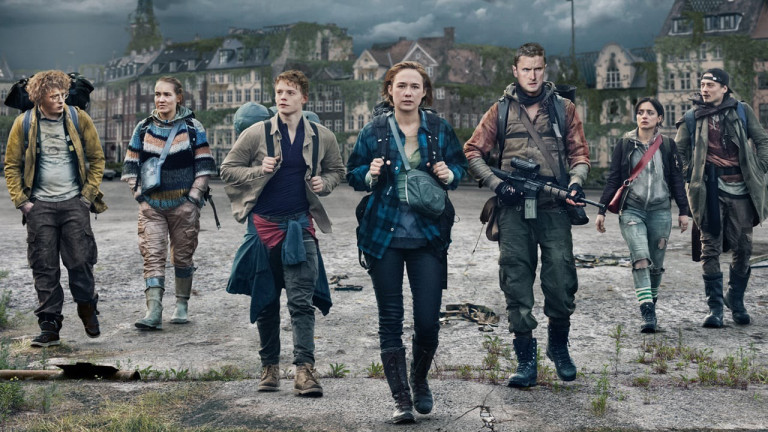 The Rain is Netflix’s first Danish series. Of course, the subject – a virus that kills most of Scandinavia’s population – may not be everyone’s binge-watching cup of tea during the COVID pandemic. The show wraps up in the third season, and there will be no follow-up.

Siblings Rasmus and Simone are yanked from their regular lives by their parents, who seem to be in a panic about the oncoming rain. Soon, Simone and Rasmus learn that the rain carries a vicious virus. It violently kills as soon as people come into contact with it. Their father, a scientist, leads them to an underground bunker which is obviously designed for just such an event.  But he quickly leaves again and never returns. Their mother soon gets killed, leaving the two kids living alone in the bunker for 6 years.

Eventually, the rations run out and other survivors force themselves into the bunker. Simone and Rasmus join up with the group and make their way across a destroyed Scandinavia to reach Apollon, the science organization their father worked for. They soon find out that the virus was man-made, and at first, Rasmus is in great danger. However, things take a turn. Suddenly, it’s Rasmus who endangers everyone else, as they try to find a way to stop the virus.

The Rain has a bit of a Walking Dead vibe. The group of survivalists fight a number of enemies, obstacles, and science itself. They fight to survive and save themselves and the few humans still alive across Scandinavia. In the process, they learn to do things they’d never thought possible.

While the show starts out as drama, once it goes into the second season, it goes heavy on sci-fi. By the third season, it adds a bit of fantasy to the mix for good measure. There are a few scenes that start to go a bit overboard. Overall, however, it’s a great show if you like apocalyptic thrillers with a touch of science fiction and fantasy. The relationships between the main characters provide another level of story, which is done pretty well.

As with all Netflix foreign programming, the audio dub and subtitles are often different from one another, even when both are set to the same language, but it’s close enough.  If you have the patience for it, watch it in Danish with English subtitles. Most of Netflix’s foreign programming dubs are slightly sub-par, sounding like a few very bored extras did a very bored table read.

Click below to see the trailer for the first season of The Rain.