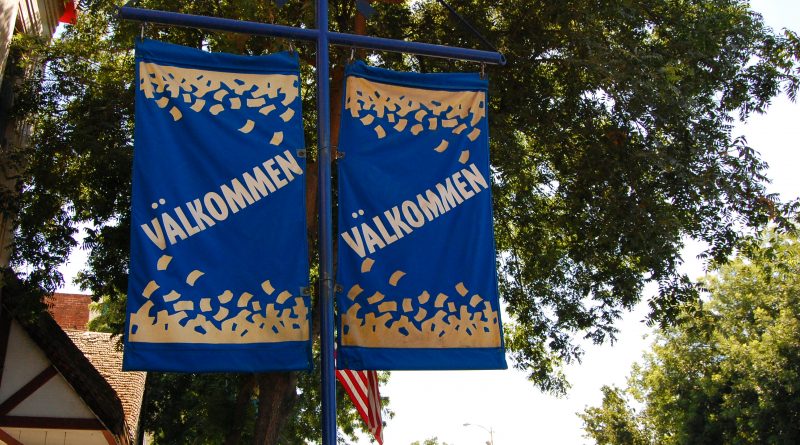 Kinsgburg is one of many towns that gets to call itself a Swedish village. It’s a fairly small town, about 20 minutes outside of Fresno, California. The 2010 Census reported close to 12,000 residents.  Some online sources claim it was first settled in 1874 by two Swedish farmers who originally named it Wheatville.  Wikipedia claims it started as a railroad town called King’s River Switch. One thing everyone agrees on is that over time, the name changed a few more times, until finally settling on Kingsburg in 1908.

Whatever the origin, the Swedish influence is quite obvious throughout downtown Kingsville. A Northern European style, teapot-shaped water tower and a bright orange Dala horses around town add to the Swedish theme.

Kingsburg does offer a few Swedish shops and places to visit in the Kingsburg Historical Park. But unless you’re truly excited about Swedish-influenced architecture, Kingsburg is probably best visited during one of their events.

The town celebrates an annual Swedish Festival in May, featuring live music, costumes, music, shopping, a parade and the crowning of the Festival Queen. Of course, you’ll get to enjoy a Swedish Smorgasbord, and if you want to join a foot racNote, you can participate in the Dala Horse Trot 10k & 2-mile run/walk.

A bit less Swedish, but still entertaining: Kingsburg hosts a Crayfish and Jazz Festival every September, as well as an annual car show, and 6 weeks of Summer Band Concerts under the Stars.  Of course, December features the Julgrans Fest Christmas Tree Lighting Ceremony, and the Santa Lucia Festival Christmas Village Celebration.

Mid-February to Mid-March, you can also use Kingsburg as a starting point for the Fresno County Blossom Trail. Thanks to a lot of orchards in the near and around Kingsburg, you can enjoy miles of spectacularly blooming almond, apricot, apple and orange trees, to name a few.  In the summer time, of course, this turns into the Fresno Fruit Trail, offering lots of fruit stands and winery tours.

Outside of festival days, Kingsburg isn’t really worth visiting as a stand-alone Swedish destination.  It’s Historical Park features a few curiosities such as the Olson Bottle Shop. This small building does indeed house a bottle collection. What kind of bottles is not specified on the Historical Park Society’s web site.  You’ll also find some miniature versions of farm equipment, and what’s only described as “miscellaneous items”.

Perhaps the most noteworthy attraction in Kingsburg is their historical jail. Although historic, in this case, only covers about 80 years. It’s open for self-guided tours, and set up with prisoner and jailer mannequins. However, with only two cells, it’s probably little more than a 5-minute visit.

Further listings on the Historical Park site include a Tank House, a Tractor Barn, the fire department, a gas station and the bandstand.

And thanks to the Sun-Maid Raisin offices in Kingsburg, you can add the world’s largest box of raisins to the attractions of Kingsburg.  That, however, isn’t really much of a destination outside Sun-Maid’s opening hours, when you can also visit the raisin gift shop.

It seems overall, the noted buildings or so-called attractions of Kingsburg are aimed more toward the town’s citizens, and those who donated them, than carry real tourist attraction value. But if you’re in the area during one of their festival times, you just might be able to enjoy a day’s worth of Swedish feel in downtown Kingsburg.

Check out more roadside attractions on our Attractions page.