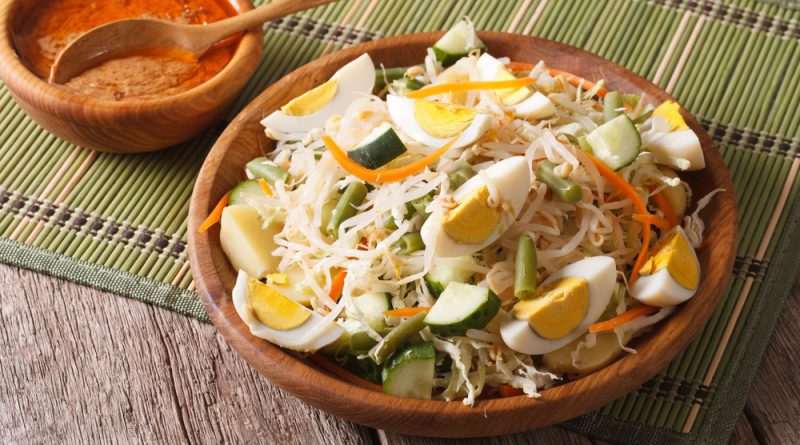 I recently took an Indo Dutch fusion cooking class with Chef Jeff Keasberry. My group made Gado Gado which is a vegetable salad with peanut butter dressing. Yes. This Indo Dutch dish is as yummy as it sounds. And it was easy to make with Jeff instructing and supervising.

What is Indo Dutch Cooking?

Don’t feel bad if you’ve never heard of Indo Dutch cuisine. It was a new one on me, and I’m a food blogger. The common name used in the English language is Dutch Indonesian. But the proper way to describe the people of mixed heritage, and its resulting fusion cuisine, is Indo Dutch.

In the United States, fusion foods tend to be more common or more talked about on the west coast, especially in California. That’s not to say that fusion is not done elsewhere in the States (and globally). In the American South, many dishes are a mash-up of European and African foods.

The early colonists in America liked dishes from the European homeland. Those often were made and modified by African slaves of an earlier era with a unique and delicious blend of the dishes from the disparate continents. That’s really the heart of fusion, two or more cultural cooking traditions coming together to make something new and different (but with familiar elements).

Indo Dutch fusion is, likewise, a marriage of early colonialism with food traditions of the involved cultures. The result are creations that are different from, but reflective of, both cultures.

Suddenly Bitterbal, which is a style of Dutch croquette, meets fried rice for a snack that makes great home or street food.  Or, Klappertaart becomes a fabulous dessert which borrows from the Dutch tart tradition married with the young coconut of the Indonesian island of Manado. The result is an inspired cross between a cake and custard pudding that can be eaten hot, warm, or cold, and any time of the day.

How Did Chef Jeff Get Into Indo Dutch Cooking?

Oma Keasberry (Jeff’s grandmother) opened and ran an Indonesian restaurant in Amsterdam: Djokja. She opened shop in 1954, and her food was so popular that she eventually wrote and published a cookbook of her culturally inspired recipes which sold for over twenty years.

Jeff learned to cook Indo Dutch from his grandmother, and also from his mother. When Jeff came to the U.S., he found that little was known about the cuisine he grew up with in the Netherlands. Friends loved his food, so he wrote a cookbook about his culinary heritage, sharing stories and recipes.

In fact, he is now working on his fourth cookbook honoring said heritage (Two of those originally published in the Netherlands, and one published in the U.S. in English). As Jeff puts it: “My mission is to make Dutch and Indonesian cuisine more popular, and accessible to the home chefs in the U.S.”

Cookbooks are great, but there is nothing quite like learning shoulder to shoulder with a master of a dish, so cooking classes were a natural extension of the work that Jeff has done.

How Does an Online Cooking with Keasberry Class Work?

If you want to explore ethnic fusion cooking with Jeff, you first, of course, sign up at Cooking With Keasberry.

Jeff emails you detailed instructions. You get the date, time, and Zoom sign-in for your class as well as an ingredient list. One thing I really liked was that Jeff included extra notes about ingredients and even photos for some harder-to-locate items.

Instructions Ahead of Time

Since I settled on the east coast of the U.S. and in a rural area, some items are not familiar or hard to locate in the grocery stores. In fact, some grocery items may not be at my local grocery, but I was able to work with the list and adapt as needed.

For example, Jeff’s recipe called for Kecap Manis (sweet soy sauce). His list included a recipe to make that from scratch if needed/wanted. The shrimp chips are not sold here, but he had noted that veggie chips could be substituted. Seeing a photo of Sambal Oelek at the end of the ingredients list was very helpful. I would otherwise not have known to start in canned goods had I not reviewed the list beforehand.

When it’s time for your cooking session, you sign in five minutes before start time. Jeff welcomes you and others to the class. This is less like a college lecture and much more like a neighbor inviting you into his kitchen and then explaining each step along the way. It’s also interesting if you find common ground with other cooks in the class. I was excited to find that one guy in my group was big on barbecue which is a passion of mine since I moved to North Carolina.

Things quickly heat up (so to speak) as Jeff begins making – and talking about – the dish featured in the class you selected. He does some prep work like having his vegetables washed and some items chopped ahead of time, but does the key steps in real time along with members of the class. Since he can see everyone on his screen, he can pace and also check if anyone seems to be having difficulties. It’s not a big deal to be lagging, and Jeff makes everyone feel at home while making sure each person is mastering the skills. You won’t feel out of your element in Jeff’s classes.

There are, obviously, times in a cooking class where everyone waits for the proverbial pot to boil or when some fellow students chop and dice a bit slower. Jeff adds value to any down time by adding history, tips, or life experiences. He’s invested and interactive, so the event has that real versus virtual feel, but the advantages of the online format.

My class came in at under an hour which is a comfortable amount of time for a new dish. There was plenty of content to master a new dish and get a flavor of a new cuisine, Indo Dutch. But, the class did not become a marathon or stressful like a Gordon Ramsay production. Jeff also offers a Rijsttafel in a Box one-on-one class, where he sends spice mixes and condiments to your home ahead of time. To find out more about Rijsttafel, read Jeff’s post on How to Eat a Rijsttafel.

And check out Jeff’s Indo Dutch Taste Test video featured on our Home Page or on the right-hand sidebar of this post.