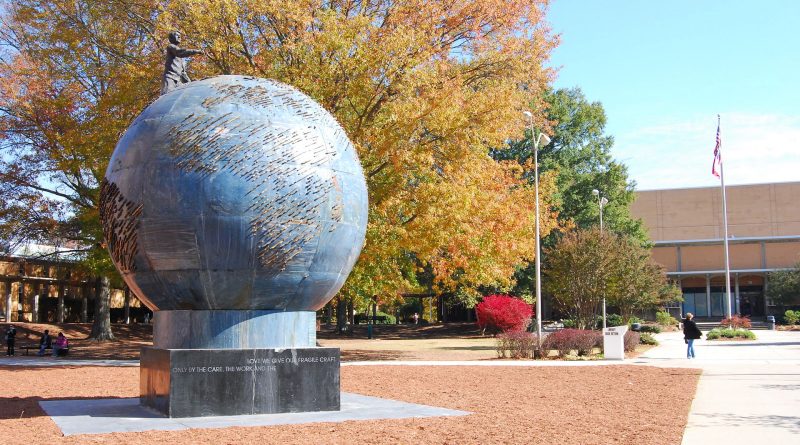 It’s usually a good sign when an artist is known by just one name. Finnish artist Eino Romppanen was one of those people – at least in the world of sculptures. Simply known as Eino, the Finnish-born artist had moved to the U.S. in 1962 to study at Santa Monica College, California. Like so many Europeans who initially come for a limited time, he decided to stay, and lived in America until his death in 2018.

Although there isn’t a lot of information about Romppanen on the internet, his work was commissioned worldwide. More than 500 pieces are attributed to him, but sadly, hardly any of them are recorded online.

But even those who aren’t particularly enthusiastic about sculptures should remember Eino for at least one piece: Spaceship Earth. (Although it’s entirely possible that the artist spent the last 14 years of his life trying to forget about the debacle.)

Created to remind future generations to take care of their delicate planet, Spaceship Earth unintentionally underscored the point of it’s fragility when it crumbled under its own weight after just 2 months.

The Inception of Spaceship Earth

Spaceship Earth was commissioned in 2000 by Brian and Jennifer Maxwell, founders of PowerBar. Their goal was to honor David Brower, first Executive Director of the Sierra Club, and lifelong environmentalist.  Unfortunately, Brower died only months after the idea had been conceived, so he never got to see sculpture. And considering the fate of the 175-ton display, that may have been a good thing.

Spaceship Earth was formed from 88 individual pieces of Brazilian blue quartzite, bonded with specially-made polyepoxide. A life-size bronze model of David Brower was added to the top, and another 2,400 bronze pieces outline the land masses.

The Importance of Planning

Some slight lack of pre-planning must be attributed to Brian and Jennifer Maxwell, rather than Eino himself.  Apparently, they commissioned the piece without actually having a place to put it. The benefactors and the artist tried, unsuccessfully, to convince art commissions and city councils in a number of cities to take Spaceship Earth – after the 175 tons of marble had already been delivered to Eino, and sat in a parking lot, waiting to be assembled.

For about a year, Eino lobbied to have Spaceship Earth placed in the streets of San Francisco. The San Francisco Arts Commission’s Visual Arts Committee wouldn’t hear of it. They felt that Spaceship Earth “had little or nothing to do with the city”. At 15 feet in width, it was also deemed to be too big and, they felt, not actually representative of Brower’s ideals.

In 2004, Jennifer Maxwell tried the City of Berkeley. At first, the Berkeley Arts Commission was not thrilled either. Feeling that the sculpture had been “forced on the city”, they eventually relented and approved the placement of Spaceship Earth. They did, however, stipulate that Bower’s bronze topper had to be left off. Their second requirement was that the Maxwell family had to pay the entire installation cost. One has to give the Maxwells points for their commitment to Brower and Earth: the cost of Spaceship Earth came to a hefty one million Dollars.

More than 30 potential Berkeley locations for the sculpture were considered. Unfortunately, the negotiations about where to put the piece just kept dragging on. And while Berkeley still squabbled about where to place it, Kennesaw State University (Georgia), contacted Eino and accepted the memorial.

Creating Spaceship Earth took considerably less time than trying to find a home for it. In 2006, about a year after Kennesaw University had accepted the piece, it was finished. After a painfully long unveiling ceremony (the tarp covering the piece was stuck on Brower’s statue), finally, there it stood in all it’s glory. That is until one night, the guards at the university were rocked in their offices.

At first, they thought an earthquake had hit Georgia. Once they went outside to assess the damages, however, they found that not Georgia, but earth itself had been rocked. Or rather: the entire sculpture had simply collapsed under its own weight. Ironically, the engraving “Our Fragile Craft” was prominently visible among the hundreds of pieces of rubble.

At first, Eino insisted that his work must have been the victim of vandalism. Kennesaw officials suspected water damage or poor adhesive. The collapse was actually investigated by the Georgia Police and Bureau of Investigation, but it seems the reason for Earth’s initial demise will forever be a mystery.

Unlike real Earth, it only took 4 months to rebuild the sculpture and so far, the globe has been standing tall and, fortunately, more solidly than after its initial creation.

And here a rather disappointing bit of trivia: In 2018, 220 Kennesaw University students were asked if they understood the significance of the sculpture. Ironically, none of them had any idea what it stood for.

A Trip to Kennesaw, Georgia

Kennesaw, GA, is about 30 minutes North-West of Atlanta. If you’re ever in the neighborhood and want to snap a selfie with the Earth that crashed and got put back together, note that it is publicly accessible, but parking is only available on university grounds.  (And to be on the safe side, don’t stand too close.) Unless you check in with campus police first, you will get a ticket.  If you’re looking for other things to do to make it a day trip, nearby attraction include The Southern Museum of Civil War and Locomotive History, Kennesaw Mountain National Battlefield Park, and the Museum of History and Holocaust Education.