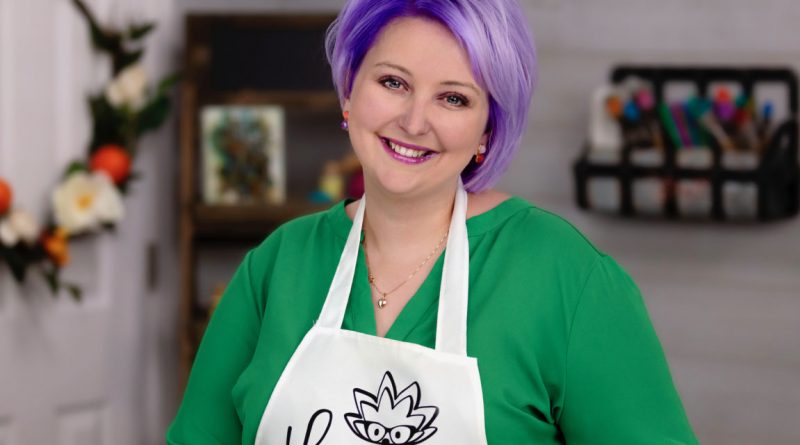 Alexandra Stapleton-Smith, founder and CEO of The Hedgehog Hollow, didn’t plan to turn her passion for crafting into a successful creative empire. The crafting mogul began her journey in 2016 when she and her husband moved to the U.S. While her husband had a work visa, Stapleton-Smith only had a visa to reside in the country. Unsure of how her life in the U.S. would unfold, she knew that she at least had to find a way to keep her mind active. As a result, she launched a crafting blog.

The Hedgehog Hollow, so named for her childhood memories of caring for hedgehogs with her grandfather in Great Britain, primarily focuses on hand-made greeting cards, although you will find an occasional DIY home decorating video, or British holiday cooking tutorials.

Initially, the Hedgehog Hollow was intended to be “just something to keep me out of trouble”, but today, it’s a thriving business with it’s own line of craft supplies and a crafters’ subscription box, featuring a monthly card theme.

The blog’s humble beginnings allowed Stapleton-Smith to pass the time by sharing a few tutorials and crafting ideas. Although she did not foresee the blog’s exponential growth potential at the time, she still made a point to set a few goals along the way; mainly in regard to how many followers she could garner. One short trip around the sun later, and Stapleton-Smith realized that she was on to something game-changing.

“Within a year we had 10,000 followers,” she recalls. “People were taking notice, and at that point, we decided to turn it into a business.” She subsequently began a subscription box program, and the hobby-turned-business officially began to take flight.

Living Life and Doing Business in The U.S.

Transitioning from blog-writer to business owner was a natural step for Stapleton-Smith, but monetizing her passion in a foreign county did not come without obstacles. Although Stapleton-Smith and her family hail from Britain and speak fluent English, they still struggled with a language barrier.

Asked what she felt to be the most notable thing to get used to in a foreign country, Stapleton-Smith observes that “we speak the same language, but we don’t speak the same language.” Decoding the American tax and permit system certainly took some exploring, but Stapleton-Smith took comfort in knowing that such paperwork is likely just as headache-inducing in the U.K. as it is in the U.S.

Of course, adjusting to life and business in the U.S. has been no small feat, but Stapleton-Smith remains optimistic. Luckily, she specializes in an industry that is notoriously popular all over the world, but crafting is especially popular in the U.S. According to a study conducted by the Association for Creative Industries (formerly known as the Craft and Hobby Association), the creative industry in the U.S. was worth $43.9 billion in 2017 – a 45% increase since the study was last conducted in 2011. And the pandemic has certainly brought even more attention to the craft business in 2020.

Stapleton-Smith concedes that her business may not have been quite as successful if it had launched in the U.K. instead of the U.S. “I have said numerous times, I don’t think it would have been as successful”, she states. “A lot of companies that manufacture [craft supplies] are based here [in the U.S.]. We always see happenings at Michael’s, Joanne’s, Hobby Lobby, those big box stores.”

A Knack for Marketing

Although navigating the eCommerce landscape in a foreign country naturally came with a wealth of uncertainty, the creative CEO found this path work in her favor.

Launching a successful business, whether U.S.-based or not, would not be possible for Stapleton-Smith without a strong understanding of who her audience is and what their needs are. Being an active member of the arts and crafts community gives Stapleton-Smith a natural understanding of her target audience, but keeping a pulse on what’s new and exciting in the industry is something that she finds to be imperative – especially for generating new ideas. “I don’t think I’ll ever really run out of ideas… techniques change, new products come out,” she says. “I kind of get inspiration from everywhere.”

The multitude of card themes featured on the Hedgehog Hollow site are a testament to that statement. From pugs to bees, couples, sugar skulls or avocados, the Hollow features themes upon themes for hand-crafted cards for any occasion.

Stapleton-Smith’s British roots are not only responsible for her love of paper crafting, but they also give her a well-rounded understanding of both the local and global crafting markets. She notes that while paper crafting and sewing are the most popular crafts in the U.K., crafters in the U.S. tend to be more interested in home decor.

In turn, Stapleton-Smith utilizes her paper crafting knowledge-base to develop techniques and tutorials that her U.S. audience will find to be useful. “When we do our videos, we show paper crafting, but we suggest… this is how you could incorporate it in a wreath, or in a frame for your home.”

Pivoting in 2020: Technology and COVID

Despite the world shifting from tangible paper goods to digital documents, Stapleton-Smith doesn’t see paper crafting – and more specifically, card making – going anywhere anytime soon. “I think there’s definitely been a resurgence in sending something handmade,” she explains. She also acknowledges the Renaissance-like resurgence of crafting due to COVID, as it’s an activity that can easily be done from home. And, she’s right: according to the Washington Post, mental health experts agree that crafting is a positive way to push through the Coronavirus pandemic. As such, the Washington Post also notes that retailers such as Michaels and Yarnspirations have seen an uptick in business and general interest.

Stapleton-Smith’s message to the community, and those who may be in a similar situation as she once was, is to focus on your business’s evolution. Additionally, she emphasizes the importance of collaboration. “We started with the videos, then [the] subscription box. [We] won an award after a year for the best online business in the industry.” She adds, “Our subscription box is all about collaboration, the channel is all about collaboration, our new business features a lot of different designers and [collaborators].”

The story of The Hedgehog Hollow is nothing short of inspiring, and if anything, it proves that it’s possible to sustain a fulfilling, passionate living for oneself in the U.S. – even if the waters are murky in the beginning.