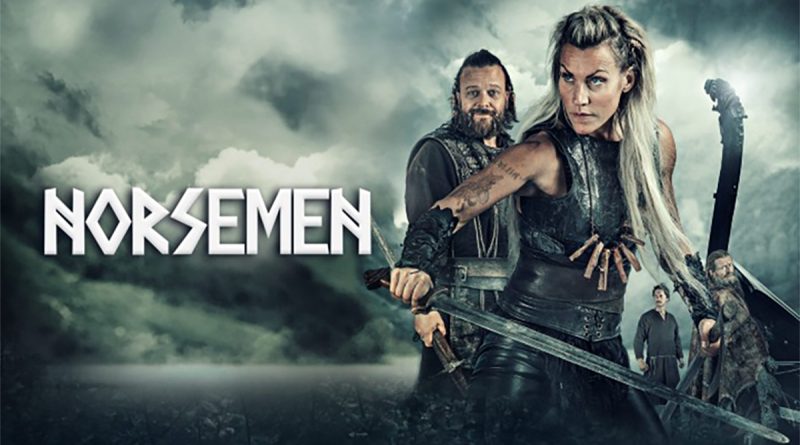 Although written and directed by Norwegian filmmakers Jon Iver Helgaker and Jonas Torgersen, Norsemen was filmed entirely in English. No need for subtitles or dubbing. Because of that, the audio option is English only, but it has been subtitled in French and Spanish as well as English. At first, Norsemen made me think of it as a cross between Game of Thrones and Monty Python. After a while, however, it also felt a bit like watching The Office, Viking style.

The residents of the small village of Norheim do what any Vikings would do in the year 790. They raid, plunder, pillage, and kidnap to bring home slaves, or ‘thralls’, as they were called.  But in between beheading thralls for human sacrifice, peeing on people, and slicing off ears, the people of Norheim grapple with a lot of everyday problems.

Problems like your wife showing up as you’re about to head out to a raid, reminding you that you already committed to a poetry reading with another couple. The usual ‘We need to get out more’ problem. Or completely missing your brother’s funeral barge with the flaming arrow. You’re just not very good at it, but can’t admit your ineptitude. Meanwhile the rest of the village giggles and boos the performance – or lack thereof.Nothing is too small to be discussed: the ship’s seating arrangements on the way to a raid, or the bouquet of the mead offered at a raid party. The warriors even discuss practicality vs. fashion sense when it comes to horns on a helmet.

When Norheim’s chief Olaf is murdered, his brother Orm takes over the village, despite the fact that he has absolutely no talent for leadership.  Orm decides it’s time to put Norheim on the cultural map. Rather than making his Roman slave Rufus work, Orm appoints him Creative Director of Norheim.

To build a theater stage, the town’s warriors end up having to surrender their weapons to turn into building materials. Of course, this comes at a most inopportune time.  Froya, Orm’s tough-as-nails warrior wife, long since tired of her husband, entertains herself raping monks during raids, while flirting with Arvid.  Unlike Orm, Arvid is a real warrior, although very much under his wife Hildur’s thumb.

You can’t be overly sensitive if you plan to watch Norsemen. The show contains a good amount of violence, crass humor involving various body functions, Viking porn drawings, and frequent talk of rape.  At times, the show, having been shot in English, requires a bit of imagination. When the Norheim raiders bring back new thralls from Britain, everyone obviously speaks English in the show. For the sake of the story, however, the Viking actors pretend to not understand what the British thralls are saying. they even ask around for translations from other thralls. But somehow it makes sense and adds to the quirkiness of the show.

Norsemen certainly is worth watching, even if you’re not a fan of Vikings randomly relieving themselves on their thralls. If you can get past those occasional dips into crude comedy, you’ll find an entertaining satire about Nordic life in the 8th century.

Kudos to the creators who spent a lot of time and effort to figure out how to outwit Netflix’s lack of promotion for their first season.  With a carefully crafted Facebook campaign targeting big cities and heavily Norwegian-populated states like Minnesota, Wisconsin and South Dakota, the filmmakers managed to get the first season on Netflix’ radar. The second season became a Netflix Original, offering more promotion via in-house marketing.

Norsemen is still a somewhat underrated show and it remains to be seen if there’s a 4th season.  Season 3 has just been released in 2020, and is actually a prequel to Seasons 1 & 2.

Click on the image below for the official Netflix trailer of Norsemen.

For more European TV Shows, go to our Stream page.