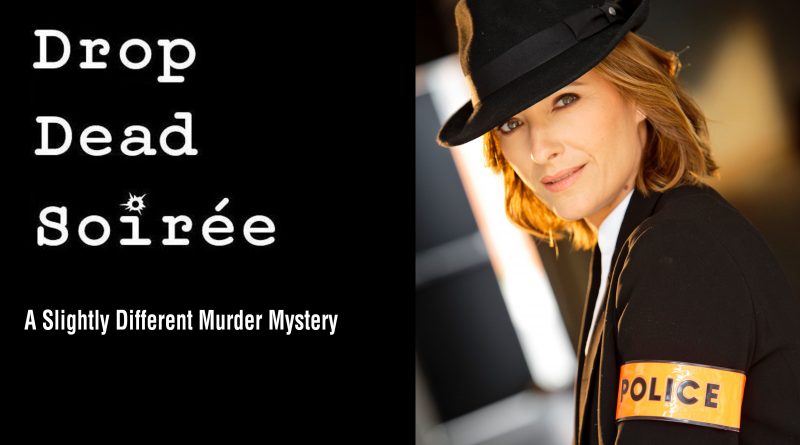 If you’re terrified at the thought of being put on the spot during a murder mystery game, we have good news for you. Drop Dead Soiree, run by French-born Cecile Namer, offers all the criminal sleuthing with none of the embarrassment of being called upon in front of an audience.

It started in Toulouse, France. Pascal Martin, playwright and engineer, created Mortelle Soiree, a murder mystery game meant for both private parties and companies looking for team-building exercises. When Cecile Namer learned that Pascal was looking to expand his business to Paris, she jumped on the opportunity and started Mortelle Soiree Paris.

We all know the phrase ‘Be careful what you wish for’. Cecile had always hoped to some day work in the U.S., And just as Cecile had started her business in Paris, her husband was offered a 3-year assignment in California.

Without a network in Los Angeles, Cecile felt that 3 years just wasn’t enough time to build a client base for a successful business. She returned to her previous line of work as a translator and, having garnered some stage acting experience in France, picked up occasional acting jobs. When her husband’s assignment turned permanent, no longer saddled with a deadline, Cecile finally had an opportunity to revive Drop Dead Soiree, the murder mystery with a French twist.

Drop Dead Soiree comes in several formats.  Cecile and an optional team of professional actors can be hired for personal as well as corporate events. For anyone wanting to try it before committing to a private booking, she frequently hosts public events in the Los Angeles area. There, players get to enjoy a 3-course meal before solving the murder presented to them.

Unlike many interactive murder mysteries, Drop Dead Soiree does not assign players the roles of suspect or witness.  Instead, participants work solely as investigators. By exploring copious amounts of documents, they try to figure out which of the suspects presented murdered the poor soul lying in the middle of the room. The scenarios vary and, according to the Drop Dead Soiree website, there are a total of 40 different case scenarios available, so you definitely can enjoy the game more than once.

After hearing the known facts of the case, you will ask the chief inspector, played by Cecile, for available information such as the autopsy report, fingerprints or trace evidence found at the scene. You explore bank or cell phone records of the suspects, and hear juicy details the police uncovered about the suspects’ love life, work history and prior criminal records.  There’s a witness as well, played by a professional actor, who goes from group to group to answer any questions they can think of. While the witness will never lie, he or she also will not just serve you all the answers.

It’s up to your team to determine what kind of documents, reports or search results to ask for. Oftentimes, the report you felt will give you a vital clue only leads to more questions. In turn, you need to request more evidence. To win the game, you must not only pin the right suspect, but also present their motive. Before you know it, 2 hours have flown by and the chief inspector expects you to close the case.

I attended two of the public murder mystery events with friends, courtesy of free tickets by fellow European Samba Schutte. My love of binge-watching CSI had me convinced that this would be child’s play. But I quickly learned that it’s not as simple as that.

Document after document from the chief inspector’s desk only led us further down a maze of intrigue, affairs, and treachery.  All the while, we observed the other groups, unable to suppress the suspicion they knew something we didn’t.

Occasionally, one of us stood in line at the chief inspector’s desk, sneakily observing what evidence the other team requested. Just in case they knew something which we hadn’t thought of. You will only receive the evidence you specifically ask for. (Although, to avoid frustration, the chief inspector will occasionally nudge you back on the right track.)

In the end, bragging rights about solving the case went to one of the other groups each time. But instead of deterring us, that only became an incentive to sign up for the next event and try again.

The public events that include the 3-course dinner last about 3 hours.  There is no minimum number of people required to sign up for those. If you’re on your own, you can be added to a group that still has room for an extra investigator. Private groups or individuals can book an event to take place anywhere they’d like. The game can be customized for any size group between 10 and 100 participants.

Companies can book Drop Dead Soiree for team-building exercises. Cecile will bring the murder mystery to the business, or any preferred location.  Along with binders full of evidence, Cecile may bring one or more professional actors to play the role of witness. Companies can also request a professional coach to join the event to take the team-building lessons up a notch.

In times of Covid19, meeting up with a group of strangers in a restaurant isn’t an option. So Cecile used the downtime to create an online version of her murder mystery, which people can play via Zoom. Players create their group and use individual breakout rooms to discuss evidence. Instead of binders, information gets posted on Drop Dead Soiree’s Criminal Investigation website. Within the rooms, they also interact virtually with the chief inspector and one witness.

Where and How Much

Joining Drop Dead Soiree’s general online investigation costs $15 per connection.  You will be grouped with other players already signed up. If you want an event for yourself and your friends, the per-player rate is the same. However, there’s a minimum charge of $350, so you’ll need to round up a dozen or so friends. Note that the rate applies per computer. If your entire family huddles around one laptop, the charge is still only $15 for that one connection.

For a private murder mystery, or to be notified of the next public event, e-mail Cecile Namer directly at losangeles@dropdeadsoiree.com.

For more information on the game in general, and how to book a Zoom investigation, check out Drop Dead Soiree’s website at www.dropdeadsoiree.com