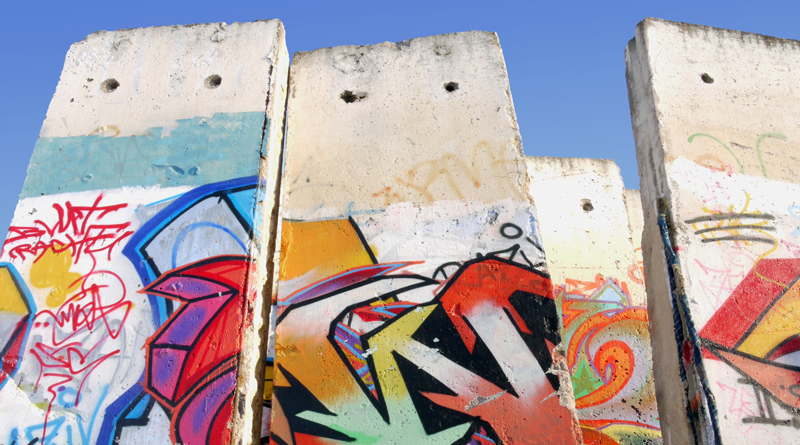 The term wende (pronounced as “venda”), a German word meaning turning point, is not only suitable for describing the unprecedented period that led up to the Berlin Wall’s destruction. It is also representative of the point in Justinian Jampol’s life when he made it his mission to preserve Cold War artifacts that were otherwise destined for neglect and destruction.

The early 1990s was a notoriously tumultuous time as the Berlin Wall ultimately came down in November of 1991; however, the wall was not the only artifact of the era that was at risk of being demolished. The turmoil that followed in Eastern Europe also led to the destruction and vandalism of historical landmarks, statues, and consumer products. Additional pieces, including pictures and other printed materials, were mostly left to deteriorate.

Jampol knew that preserving the history of the Cold War was imperative for fostering a stronger understanding of the period’s impact on today’s society. The museum’s humble beginnings consisted of a few items that Jampol acquired in the mid-1990s but quickly ballooned by the year 2000, which can be attributed to a substantial donation from activist Alwin Nachtweh. The museum eventually became incorporated in 2002 as a 501(c)3 and is currently located in Culver City, California.

From Personal Collection to Esteemed Institution

Jampol’s modest assemblage slowly grew into a collection of over 100,000 archives and is widely recognized as an esteemed research institution. The museum has also offered comprehensive programs and exhibits which further explore the Cold War’s influence on modern social and political issues. Some of these included Communism for Dinner, which featured commemorative East German plates from the era; Deconstructing Perestroika, an exhibit highlighting hand-painted political posters from the Soviet era; and, The Wall Project, the museum’s most notable production. The Wall Project was a public art initiative designed to memorialize the 20th anniversary of the Berlin Wall’s demise.

Wende Museum also emphasizes the importance of personal histories and the nuances of everyday life. The institution not only works to preserve oral histories told by those who lived through the era, but it also seeks out smaller, more personalized belongings that add a third dimension to such stories.

The museum’s curators take this initiative one step further by ensuring that these stories come from a diversified group of individuals. The goal is to explore how different people from varying backgrounds expressed themselves in the world around them, and how these expressions have impacted today’s cultural and societal preferences.

Preservation of the Uncomfortable History

The Wende Museum is acquiring Cold War artifacts at an unmatched rate. Unfortunately, many museums in Europe have resorted to stripping their archives of controversial Cold War-related artifacts, but Wende’s California location allows for a deeper, more “unhinged” exploration into polarizing events. The museum hopes that future generations will use its extensive collection to formulate their interpretations and analysis, applying this knowledge to the modern world.

There are currently four new exhibitions, from life-size art pieces to photography-based displays. However, due to COVID-19 restrictions, visitors may only view exhibits in the garden area until further notice. A forty-five-minute self-guided tour through the garden will take visitors to Common Fantasy and Relics of the Cold War, which are two of the new exhibits. The museum encourages interested individuals to check back weekly to reserve a ticket for a self-guided garden tour.

You can also view the museum’s online collection, which is updated on a regular basis and currently includes 1,000 items that may be observed at any time.

It’s no surprise that Jampol’s experiences as a scholar of modern European history would lead him to eventually opening a museum, but this is not merely a passion project. The Wende Museum is a historical, cultural, and somewhat controversial beacon of education. In the eyes of the museum and its contributors, preserving history with the utmost diligence and respect is a vital component of modern society.

Wende Museum also solicits contributions from anyone wanting to share personal experiences or artifacts of the Cold War era.