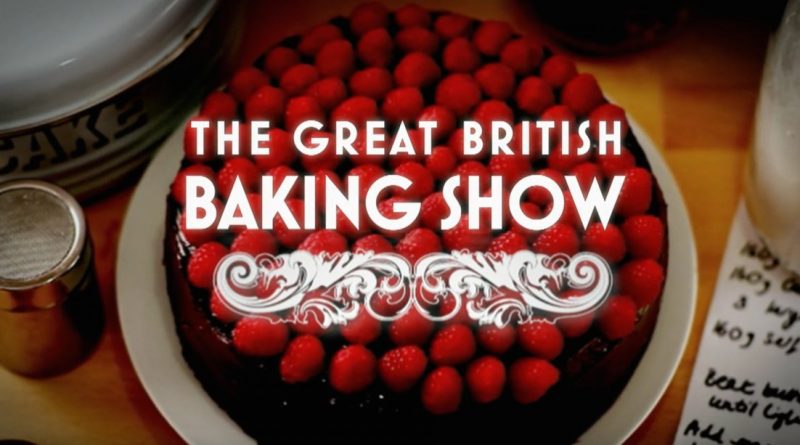 New Season: Coming to Netflix before the end of 2020 after a delay due to global pandemic. Matt Lucas joins Noel Fielding as co-host for 2020, replacing Sandi Toksvig.

On your marks, get set . . . tune in to The Great British Baking Show if you enjoy reality TV without the usual, compulsory animosity. Seriously, the contestants on the popular British competition program appear to enjoy the camaraderie involved in testing their kitchen mettle against fellow amateur bakers.

And, the program includes biography sketches of the contestants that make them feel more like neighbors from the next flat, the history of dishes, tips on how to best accomplish complicated techniques, and graphics by Tom Hovey to illustrate the process and anticipated outcome of specific baking projects.

May the Best Baker and Baked Goods Win

Top baker takes all on The Great British Baking Show, which is rumored to be congratulatory flowers and a cake plate (no big check or job in an elite bakery) after the final credits roll. The program really is all about the best baked goods including appearance, taste, and creativity. It’s all about the bragging rights.

Premise of GBBO is Rather Simple

Take a group of enthusiastic home bakers and have them go head-to-head in various baking challenges including goods such as biscuits, crumpets, Yorkshire pudding and football pie. Judge the goods blindly with feedback about errors made and also praise for successes. Pack the least impressive baker off and repeat with a new set of challenges aired weekly.

When the game is down to the top three contestants, the finalists battle it out in the three-round signature, technical, and showstopper challenges with the judges naming the ultimate best baker.

Bake Off Proves to be a Winning Recipe on Many Fronts

The Great British Bake Off kicked off August 17, 2010 to rather underwhelming reviews. Critics felt the program was too tame to draw and keep an audience. But after four seasons, Bake Off positioned at the top in the BBC Two line up. The show shifted to BBC One for three years. Then Channel 4 picked up GBBO, although BBC Studios retained the rights to syndication in a contract that stretches through 2028.

Currently, GBBO is available on Netflix under the program name The Great British Baking Show. Pillsbury holds the rights to the “bake off “ title, so the U.S. based streaming services switch up the title but not the content. The Netflix catalog contains seven collections of the program and may showcase the missing seasons at some point.

In the meantime, episodes premiere on Netflix three to four days after the prime time channel 4 releases in the United Kingdom. No. You can’t binge GGBS unless you hibernate during the first run and play catch up on the back end. On the flip side, if you love The Great British Baking Show, there are spin off series including various copycat series in a host of countries including a Great American Baking Show.

Check out British comedian James Acaster’s attempts at baking during the GBBO Stand Up To Cancer Celeb Bake Off here.