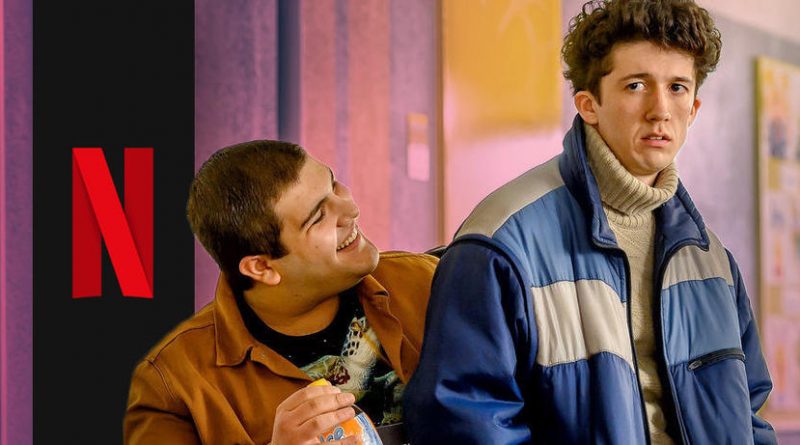 German comedy, available to stream on Netflix, now in its second season.

Nerdy high-school student Moritz Zimmerman and his wheelchair-bound friend Lenny Sandler create an app for online game fans to anonymously buy and sell game items.  Moritz’s girlfriend Lisa, after a year abroad, returns to their small hometown and breaks up with him.

Heartbroken, Moritz hacks Lisa’s social media account and learns that she’s taken up ecstasy, supplied by high-school jock Dan Riffert.  Moritz buys a large amount of ecstasy to impress Lisa, but his plan doesn’t pan out. Still owing the dealer he bought the drugs from, Moritz turns the app he and Lenny created into an online sstore for anonymous drug shopping and eventually becomes one of Europe’s biggest drug dealers.

The Story Behind The Story

How to Sell Drugs Online Fast is actually based on a true story. In 2013, an 18-year-old Max S. started selling drugs online via Shiny Flakes. Unlike in the TV show, Max had no best buddy helping him create the site, or the business. And while he was obviously a genius, making millions in Bitcoin sales over the internet, he eventually got arrested because of – postage.

Max S. didn’t put enough postage on a package which, not having a return address, sat in a post office until it finally was opened and its contents revealed. He also kept using the same post offices, and eventually, the police was able to analyze shipping data and trace the shipments back to Max S.

Tried as a minor, Max S. started serving a 7-year sentence in 2015. The Shiny Flakes domain is no more. Although, for a while after Max S.’s arrest, police showed a sense of humor by replacing the drug offerings with banners advertising police jobs. Probably not so humorous for Shiny Flakes’ mail-order clients whose addresses were on file.

Check out the English-subtitled trailer of How to Sell Drugs Online (Fast):

For more European Movies and TV shows available to stream in the U.S., check out our Entertainment Listings Here.