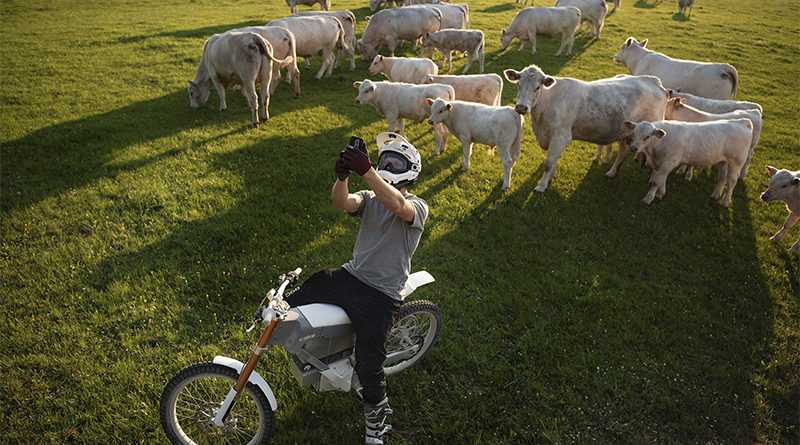 When you hear mention of Swedish Business in the US, the first thing that comes to mind is probably Ikea. Now, you can add CAKE electric motorcycles to the list of minimalist Swedish design products making a splash in the U.S. market.

Swedish entrepreneur Stefan Ytterborn is what you could call a serial founder. (One who should know all about Swedish design. Ytterborn was an Initiator & Director responsible for the re-launch of Ikea, 1993 to 1996.) In between his work at Ikea and CAKE, he founded several other companies concentrating on Swedish design and safety equipment for sports enthusiasts (POC).

His latest venture, CAKE e-motorcycles, has two traits in common with the Swedish furniture chain. Unique Scandinavian design, and those fun Swedish product names, such as Kalk and Oesa, two lines currently available on CAKE’s website.  And just like with Ikea, those names aren’t just random. Kalk is named after a type of limestone found on a Swedish island where the bikes are tested. Oesa is named after a family friend. But that’s where the commonalities with the furniture giant end.

The CAKE Philosophy and Vision

Ytterborn himself isn’t a motorcycle enthusiast.  He is, however, a lover of the outdoors, spending much of his free time hiking, camping or backpacking.  As such, it bothered him when the tranquility of nature was disturbed by the noise and smell of motorcycles. He decided to do something about it.

He founded CAKE and set to designing and manufacturing electric motorcycles with a Scandinavian design.  And while Ikea has achieved broad appeal worldwide, a minimalist design motorcycle may take some getting used to.

In an interview with Womanrider, Ytterborn once stated that his design ideas follow his own philosophy and vision rather than pander to current trends in the market. His main goal was to cut back on the noise and pollution that comes with motor sports.

Is originality in business an advantage or hinderance? Zach Clayton, brand manager at CAKE U.S., explains that while Ytterborn hasn’t compromised his vision in favor of market trends, his vision just had a lot of thought put into it from the start. That allowed him to create a convincing quality product with a unique design the motocross world is coming to appreciate.

“He didn’t want to do something any other brand is doing. Produce a bike that looked the same [as every other brand’s]”, Clayton says.  “His philosophy is that you need to be unique, but … there is a line where you can go too far. When we [CAKE] speak to design, we speak to it in terms of functionality.”

And it’s hard to argue with the functionality of CAKE.   The power is the equivalent of a 250cc motorcycle. The weight is about 50 to 70 pounds less than that of a traditional dirt bike. A “much different ride and experience”, as Clayton describes it.

Much of the features (or lack thereof), can make these dirt bikes more attractive to new riders who might otherwise be intimidated by a standard motorcycle.

“CAKE’s ride characteristics share those of a mountain bike and a motorcycle,” Clayton says.  “I would argue that our bikes are some of the easiest to ride out there. You essentially have a throttle, and all the controls at your hands.”

CAKE e-bikes are produced in Sweden and shipped to a warehouse in the U.S., where online buyers can order directly from the CAKE site.  The bike then gets delivered straight to the customer’s home.  So why have a U.S. office at all? Today’s global market doesn’t require European companies to actually be present in the U.S. CAKE could easily find a distributor to do the work for them.

Clayton disagrees with that notion. “For Swedish brands, heritage is really important,” he notes. “If we just had a distributor sell our products, we’d lose a bit of that heritage, and what we’re trying to accomplish.”

The Salt Lake City-based U.S. team of CAKE is still small. Only 8 people work at the office, but they’re all passionate representatives of said Swedish heritage.  To Clayton, it’s important to have a team that understands the branding and messaging of CAKE. But it’s just as important to have people who understand that working for a European company is very different.

Clayton has previously worked with Ytterborn at POC. He admits that this history makes it easier to adjust to very early peak team hours . But what about the major differences between the two countries when it comes to benefits or vacation time?

“Time off is the hardest one to wrap your head around,” he says about the typical 6-week vacation rule in Europe.  But to Clayton, cultural differences are simply fact. “You tell me ‘hey, tough, it is what it is’, I’m going to understand that”, he explains.  “But I get that not everyone understands. I think what’s important is having an open line of communication with your employees.”

Clayton emphasizes the importance of discussing differences in vacation time, benefits, salaries business hours from the start. Applicants should be made aware of these things during the hiring process.  He also feels that constant direct contact between U.S. and Swedish teams to be vital. Overall, Clayton feels that working for a European brand with European colleagues benefits people in the long run.

Production and Characteristics of CAKE Bikes

Everything from the design phase to the final product is European. Every part has been specifically designed and produced for CAKE. That creates a premium product which may cost a bit more on the front end. In the long run, however, it will save the owner money and headaches when it comes to maintenance and fuel.

Clayton explains the reason behind designing and creating CAKE e-bikes from the ground up. “If we had put bicycle components on an electric drive train, which is what you see a lot, sometimes the parts aren’t strong enough to handle the weight and power of the bike. They break.  On the other side, if you take traditional motorcycle parts and put them on our bike, the weight gord up substantially. It’s going to be over-built, and you lose a lot of ride characteristics.”

Those characteristics include CAKE bikes being extremely nimble, quick, and quiet. There also are very few moving parts, and therefore little maintenance.

Additionally, most of CAKE’s electric dirt bikes are actually street-legal, unlike your standard dirt bike.  This means you can ride straight from your home to the dirt trail. You can even just ride to the grocery store.  No need to haul your motorcycle on the back of a pickup truck to get it to the trail.  “It’s a different approach to real transportation no-one’s ever seen before”, says Clayton.

To top it all off, Oesa models include onboard charging. It allows the rider to charge electronics like camera equipment, laptops, or camping gear.

Looking at it from the viewpoint of sustainability, there are of course the advantages of reduced noise and pollution.  Being much lighter than the average dirt bike actually has another advantage. CAKE-designed tires don’t dig into soft ground as much as standard dirt bikes. They therefore cause less damage to fields and trails.  But what about sustainability when shipping the bikes from Europe, rather than producing them in the US?

Clayton says CAKE is aware of the fact that manufacturing and shipping across the globe doesn’t make for zero emission. But producing an eco-friendly dirt bike that can also be used for personal transportation, is definitely a good start.  Currently just available to customers in Sweden, CAKE also connects consumers with solar panel manufacturers, if they want to take their sustainability efforts a step further.

Asked if CAKE plans to bring this initiative to their U.S. customers as well, Clayton hits on another big difference between American and European companies. Sweden being a relatively small country, business connections are easier, and often closer than in the vast U.S. market.

“We have certain partnerships in Sweden”, Clayton says, “that stem from good relationships with other businesses. Sweden being smaller, it’s easier to make those connections, and make those offerings.”

He adds that it’s something the company considers offering in the U.S. as well, if they find the right partner.

The Future of CAKE is Looking Good

While CAKE, like most companies, still somewhat feels the impact of the Covid crisis, Clayton feels positive about the future of electric motorcycles.  “There’s an influx in interest within not only the outdoor space,” he says, “but two wheels in general.  Bicycle sales have gone up, and online sales are skyrocketing”.  An encouraging trend for a company that ships electronic motorcycles directly to the consumer’s home.

Of course, as interest in alternative modes of transportation rises, CAKE will also see more and more competition in the e-motorcycle space. Although, for many other brands, electronic motorcycles are not their main product.  CAKE started in that space and hasn’t veered from their path yet.

“At the end of the day,” Clayton says, “competition just motivates us to create a better product. To communicate what we do, and what we do best.”