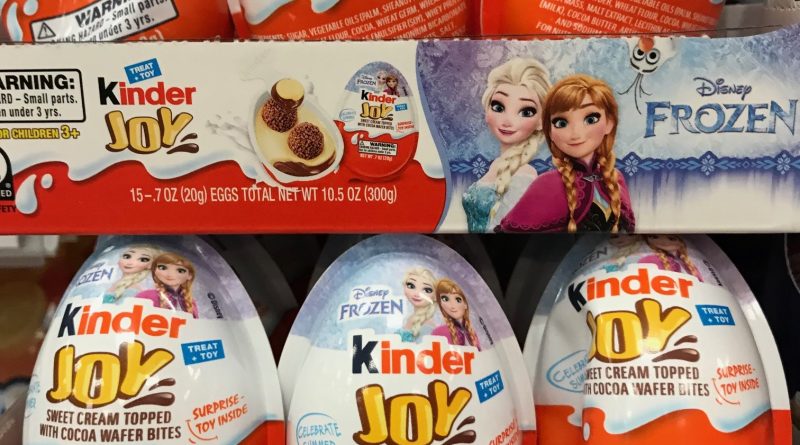 The original Kinder Surprise Egg by Ferrero Italy was conceptualized in 1968 by Michele Ferrero. A large chocolate egg filled with toys is an annual tradition for Italian children. So why not make this a year-round treat?  His employees shot the idea down, thinking chocolate eggs had no market outside the Easter holidays.  Fortunately, Ferrero didn’t listen to them. In 1974, Kinder Surprise Eggs were introduced, and sold worldwide like the proverbial hot cakes ever since. Well, except in America.

It’s the Law – Although an Outdated One

You may have heard of random old laws still on the books. Like the law in some states that says you can’t tie an alligator to the parking meter; other states are more generous about alligator parking, as long as you properly feed the meter. While the Kinder Surprise Egg doesn’t have alligator issues, it fell victim to another outdated U.S. law. In 1938, the country’s Food, Drug and Cosmetic Act banned candy with “non-nutritive objects” embedded in the candy. So the U.S. import of the treat was banned from the day of its first production run. In 1938, embedding things in food probably didn’t refer to a hard-to-open bright yellow plastic capsule inside a chocolate egg. Particularly not one that says “Toy Inside”. But the law stayed, and as of today, common sense has lost out.

No surprise that this ban only drove Kinder Egg, or rather its fans, into a life of crime. In an article posted on the U.S. Customs and Border Protection website, the port director of St. Albans (Vermont) cited 38 separate egg smuggling incidents “in 2011 alone”. An overall statistic for the year 2011 cites a total of 60,000 eggs trying to illegally cross borders. And those are only the ones that were caught.

Egg Smugglers Will be Dealt With

So what exactly does happen when you’re caught trying to bring these little illegals across the border? Nowadays, you can get fined up to $2,500 per egg, although, according to several reports, that rarely actually happens. Customs may threaten it but let you off with a warning and no eggs,. Alternatively, you have the option to just eat the contraband on the spot. A painful lesson if you brought a couple dozen or so.

In 2011, a woman who brought a single Kinder Egg across the Canadian border was warned about a potential $300 fine. She was let go without punishment, but the egg was seized.  Even more bizarre: she later received notice from the U.S. government requesting her authorization to destroy the egg.  Had she disputed the destruction and made use of her option to fight for her egg, she would have had to pay for the storage of the illegal treat.  (One can only imagine a border patrol storage locker full of stuffed exotic animals, drugs, guns, and a lonely chocolate egg hoping to one day be rescued.)

Of course, some stores selling imported goods in the U.S. still managed to sell Kinder Surprise Eggs here and there. This scandalous disregard for the law even prompted further laws and actions by the government. In 1997, a “recall for the contraband” was issued by the Consumer Product Safety Commission (CPSC). You’ll also find Ferrero on the frequently updated “Import Alert 34-02”, (aka Red List) by the Food and Drug Administration. It includes Kinder Eggs on it’s list of “Firms and their products subject to Detention without Physical Examination”.

Over the years, people tried to collect signatures for a White House Petition to make the egg legal. None of them managed to get the required number of signatures. Many brimmed with comments by people who wondered why they could purchase eggs only at Asian and European import stores.  Apparently it just wasn’t quite so simple to keep the egg down. Another side effect of the vigorous ban was the use of the Kinder Egg as part of the gun debate. You may have seen the memes asking why assault weapons are legal but chocolate eggs are considered dangerous.

The Rebirth of the Egg

Finally, in 2017, writers around the internet rejoiced and announced the return of the Kinder Egg. Many of us grabbed the celebratory champagne bottle – too soon.

The ‘new’ Kinder Egg is a nice treat on its own, but it’s not a replacement. It’s not even a decent copy.  Now called Kinder Joy, the egg is split into two parts separated by foil. One side filled with cream candy and two crunchy candy spheres, the other containing the toy. Of course, the limited space now no longer allows for the really good prizes like toy figurines. The famous “one in every 7th egg”, many of which rose to collectibles status. No more Smurfs. No more Asterix & Obelix figures, or hippos. Only tiny bits and pieces of plastic to assemble into some tiny toy that seems a lot easier to swallow than anything that ever came out of the original eggs.

There’s a New Egg in Town

And just when we think that it’s the best Ferrero could do and almost make peace with the Kinder Joy Egg, Australian candy maker Yowie steals the surprise market right out from under them by implementing a very simple solution. Yowie simply made the toy a little bigger and added a rim around the capsule that contains it. The two chocolate halves are literally separated via the plastic rim and so outwit the law against ‘embedded objects’.

Really, Ferrero?  You couldn’t come up with this simple solution? On the upside, the Kinder Joy Egg is even easier to get a hold of than regular Kinder Chocolate bars. Many supermarkets now have a Kinder Joy display stand such as the one in the picture above. You can get them at Target and World Market, and even at discount stores like Big Lots. I’ve even seen a display stand in a small tobacco and hookah shop in Los Angeles.

But if the toy is the more important part of the experience, you may want to switch to Yowie. At the time I wrote this post, Yowie contained figures of endangered animals. Lions, Tigers and Pandas toys raising awarenes for endangered species versus a few pieces of plastic to stick together … sorry, you missed the boat here, Ferrero.

Since we already allow Australia into the Eurovision Song Festival, we might as well make some room for Yowies in the candy drawer. Yowies are also spreading across the U.S. market, being sold in grocery stores, Walmart, or 7-Eleven, just to mention a few.